The UK scallop fishing industry is one of the fastest growing fishery sectors and also one of the most lucrative (Howarth & Stewart, 2014). The two target species for this fishery are the King Scallop (Pecten maximus) and the Queen Scallop (Aequipecten opercularis). These organisms dwell on the seafloor, some preferring muddy seagrass habitats and others anchoring themselves to exposed rock or similar surfaces. In order to catch scallops efficiently, vessels tow dredging equipment, consisting of steel nets, flush along the seabed. The front end of the apparatus is fitted with downward pointing teeth meant to pry up the target organisms so that they can be secured in the net.

In 2018, there were 285 UK-flagged scallop dredgers operating, and they generated an average income of £497,000 for vessels larger than 15 m and £141,000 for vessels smaller than 15 m (Seafish, 2019). With so many livelihoods at stake, concerns about increasing anthropogenic pressures on the target species have grown substantially. As some fishers go further afield in hopes of finding a sizable harvest, we are also seeing reports of increasing international tensions, such as the multi-season “Scallop War” driving aggression between British and French fishers.

While clashes over fishing grounds and worries about sustainable fishing intensities have been somewhat commonplace over the past decades, we must now face the cumulative impacts of climate change as well. While the spatial and temporal scope of these impacts is still largely unknown, species shifts in response to warming temperatures are predicted. Still, ocean acidification is viewed as one of the largest threats to scallop populations, as it will become increasingly difficult for these organisms to build and maintain their calcified shells.

Discussions are underway to make the scallop fishery more sustainable in the face of these growing threats. For one, the Ocean Conservation Trust has started a sustainable scallop hatchery in Plymouth, UK and looks to build a sustainable, diver-caught fishery from the bottom up (Ocean Conservation Trust, 2020). Similarly, other projects are looking to release scallop hatchlings and juveniles into historic scallop fishing grounds in an effort to increase future catch return. While measures such as these could prove to be quite beneficial, their efforts might be significantly compounded by some relatively simple measures.

The United Nations General Assembly has declared 2021-2030 “The Decade on Ecosystem Restoration.” With that in mind, sustainable and natural restoration solutions should be at the forefront of any marine spatial planning efforts, including fishery enhancement plans. As such, we would encourage the dual use of subsea cable protection zones as scallop restoration corridors. Subsea cables for telecommunication and power needs are already in place around the world, and due to the nature of their benthic fishing gear, scallop dredgers are among the most likely to cause cable faults (Carter et al. 2009). As such, these vessels are often discouraged from fishing directly over existing cables. Rather than being viewed as an inconvenience, the absence of benthic fishing activities over a subsea cable could provide the target species a much needed respite through which they could continue to naturally replenish the stock.

The benefits of similar so-called “restoration corridors” have already been expounded upon in several cases, with case studies ranging from giant panda habitats (Wang et al. 2014) to elephant refuges (Osborn & Parker, 2003). More recently, researchers have been looking to analyse the benefits of restoration corridors for a multi-species approach, which would take into account the benefits that this sort of protection would have for an entire ecological community, rather than just a charismatic flagship species (Liu et al. 2018). Cable protection zones could provide a similarly holistic approach, protecting a swath of benthic habitat and a variety of marine organisms, while still encouraging community and fisheries buy-in by focusing on building up the iconic and valuable scallops. While the cable protection zones are relatively narrow ( approx. 500 m to either side of the cable), this could allow for scallops to settle safely in an area; with a healthy scallop population, this area could act as a source from which larvae may resettle adjacent areas, potentially increasing future fishery yields for areas outside the cable protection zones. With many cable protection zones already upheld for safety and liability reasons, the environmental and ecological gains could benefit fishers financially in the future. 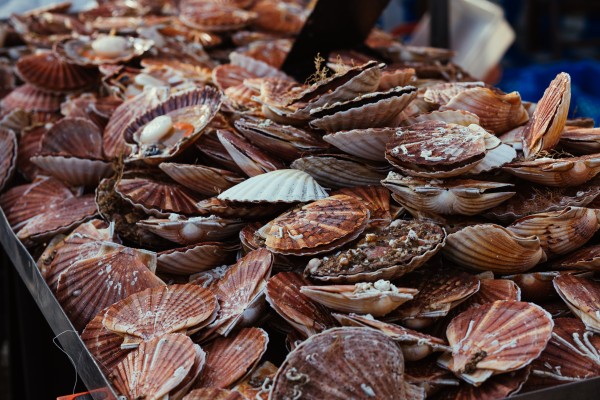